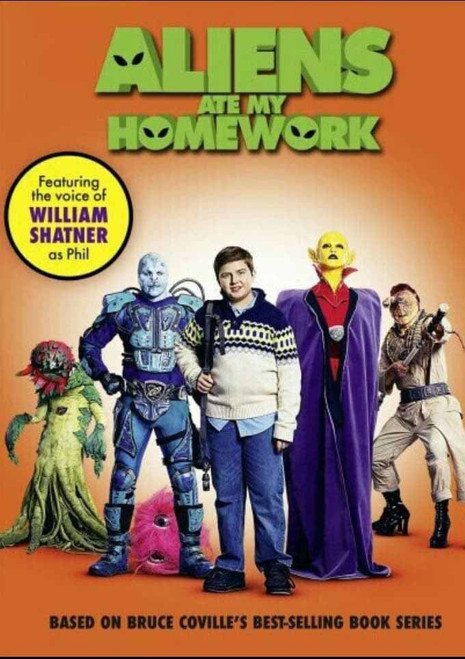 Extraterrestrials invade Earth and a pair of middle schoolers hold the fate of the world in their hands in Aliens Ate My Homework, a delightfully comical intergalactic adventure from Universal 1440 and Lay-Carnagey Entertainment. Aliens Ate My Homework is based on the first book in the wildly successful Rod Allbright and the Galactic Patrol series. Written by internationally renowned author Bruce Coville, the four-part saga has sold over 17 million books worldwide and has been translated into 16 languages. When a tiny intergalactic starship crashes into the bedroom of 12-year-old Rod Allbright (Jayden Greig), it's the start of the adventure of a lifetime for him and his cousin Elspeth (Lauren McNamara). Enlisted by the extraterrestrial Galactic Patrol, a group of out-of-this-world lawmen, Rod and Elspeth must race to save the world from Total Planetary Disaster. The film features the voice of William Shatner ("Star Trek") as the intrepid intergalactic explorer known as Phil the Plant.

Legend Of The American Sniper - Read Redemption Details At Listing